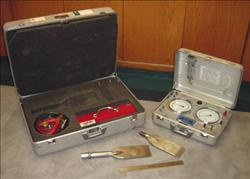 While working on his Ph.D. at the Georgia Institute of Technology in the mid-1990s, Wesley Spang learned of an innovative technology that would change the way he did business. The technology, which was discovered by an Italian geotechnical engineering professor in the 1970s, is called “in situ” (in ground) testing and involves taking ground samples for geotechnical work using a system that is less destructive to soil and can test more accurately. As a geotechnical engineer and president of Geocon Northwest, a geotechnical and environmental consulting firm, Spang said the system is superior to the technique used on 80 to 90 percent of geotechnical sampling projects.

With the rising costs of concrete and steel, Spang said the in situ system is becoming more useful than ever. “Everybody in the building industry is trying to save on costs and time,” said Spang. “The smaller the footings, the lower the cost will be.” The system, invented by Silvano Marchetti, was introduced in the United States by Florida geotechnical engineering professor John Schmertmann in the early 1980s. Spang said it is in widespread use in the eastern U.S., but not used by Northwest firms other than his. Conventional soil testing – known as standard penetration testing – calls for a hammer that drives a sampler into the ground. The soil is then brought to a lab for testing. “This can commonly result in conservative estimates of the soil’s geotechnical characteristics,” said Spang. “That potentially costs clients in overdesign.”

Marchetti’s device, called a dilatometer, consists of a wedge-shaped, high-strength stainless steel blade with an expandable membrane, connected to a pneumatic-electrical cable. The blade is pushed into the soil with a cone penetrometer rig, causing significantly less disturbance than conventional soil testing. Nitrogen gas is then introduced through a control box on the surface, flowing through the cables to the dilatometer blade. The control box takes two measurements: the first reading measures the pressure it takes to move the diaphragm off the steel sensing disc, and the second measures the pressure needed to move the diaphragm 1 millimeter into the soil. The device, he said, “causes as little impact on the soil as possible.” Those readings are combined with information about the depth to groundwater to determine soil type, soil stiffness and shear strength. That information can be used for building foundation designs, bridge foundations and highway embankments.

“At $150 to $200 per cubic yard of foundation construction, an increase of footing bearing pressure can provide significant construction cost savings,” said Spang. “The potential cost savings increases with increasing building footprint and number of building stories.” He said the greatest savings result when a building that is initially designed for pile foundations can be determined to be supported on shallow footings.”

Geocon, which has a Beaverton office and is based in San Diego, has used the soil testing device on local projects such as the Oregon Convention Center expansion, the Benson condo tower, Legacy Salmon Creek Hospital and several yet-unbuilt downtown high rises. Seismic upgrade projects include Downtown Self Storage and Kells Irish Restaurant & Pub. Spang said he has used the dilatometer in other parts of the county, as well. He used it for a multibuilding project in Florida, after another consultant had determined the developer needed to construct several buildings on pilings. Spang’s soil samples determined the buildings could be constructed on traditional footings, not pilings, and saved the developer about $100,000 on each building, he said.

In the area of seismic upgrades, Spang said he has done geotechnical projects that show that existing foundation footings can support more loads safely and the seismic retrofit can be done without the expense of expanding the building’s footprint or adding to the footings. The dilatometer blade can take as many as 250 tests in a day. Spang said the dilatometer is particularly accurate when testing soils in the Portland area, which are the silt and clay type. “This area’s soils are very conducive to this testing,” he said.

This entry was posted in Uncategorized. Bookmark the permalink.